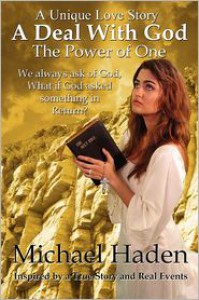 I really enjoyed this book though is was so realistic is was challenging in places. From the other reviews people either seemed to love it or hate it. I don't usually write reviews but I saw a need here for more reviews. I am in the love it camp myself.

I am not a fan of Christian Fiction that is more of Christian Fantasy where you have idealic characters who never sin and are better Christians than any of us could be. This is not that kind of book and it seems that most people who don't like this story were looking for that kind of book. This book is amazing but probably more suited for people who are into contemporary Christian fiction with characters that are just like us, real humans.

Deana is a strong character almost to the point of being unrealistic in that she is unable to fail. Seeing this book as a what could have been story about a young girl who died when hit by a drunk driver, I can understand this, and in this context an amazing girl who refuses to fail in this "second chance" is perfectly represented by Deana. I know a few Deana's and they are remarkable people who will do whatever it takes while maintaining their integrity. It's a fine line and Deana like us pushes her morals perhaps a little farther than some but less than most. Did god pick Deana because of this balance between moral and mission? I can see some Christians finding offence with this premise, they believe that god would not choose someone who would sin in the name of his mission. I don't agree, I think god would have picked someone just like Deana, the best that humanity has to offer while still being human.


On to Leon, the main male character in the novel who is highly dysfunctional. I would have liked to see Leon as more dynamic but for me it really didn't bother me. His character was just one more hurdle for Deana to overcome with God's mission. After my mom read the book we talked a lot about Leon. Leon's character made perfect sense to me but I didn't have the intimate context with someone in Leon's situation to really get it, or the readers who complained about him. For her Leon was a little too real at times... Leon was someone who experienced trauma he couldn't come back from. He was unavailable and this changed very little and I can see how this can make people angry because most of us have people in our lives like this. He may not be dynamic but he is real and I now have more compassion for him and even more compassion for the people who choose to make lives with the Leon's of the world.


This book is definitely motivates me to do better and be better, which I think is the most important aspect of a Christian Fiction book and why I would recommend this book to anyone looking to be inspired to be and do more. The story is inspired and the ending is well done.